A Celebration of Regeneration and Renewal
Portrait Unveiling 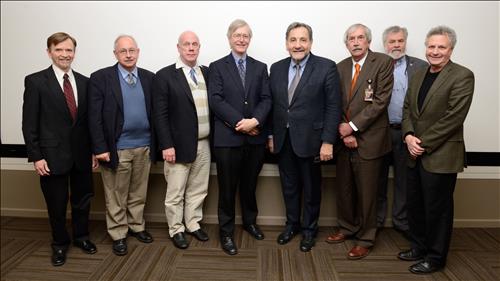 Dr. Joseph Moerschbaecher III, LSUHSC Vice-Chancellor of Academic Affairs and Dean of the School of Graduate Studies, presented Dr. Nicotera the award for his outstanding contributions to the understanding of cell survival signaling in Alzheimer’s disease and other neurodegenerative diseases, and in recognition of his leadership in the establishment of the German Center for Neurodegenerative Diseases (DZNE) in Bonn, Germany. Dr. Nicotera is the Scientific Director and Chairman of the Executive Board within the Helmholtz Association of the DZNE. 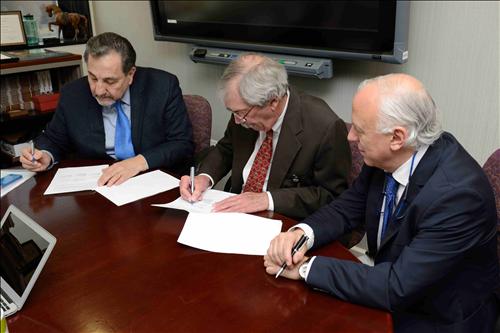 During his visit, Dr. Nicotera, along with Drs. Moerschbaecher and Bazan, signed
an agreement to establish a Collaborative Postdoctoral Training Program on Diseases
of the Nervous System between LSUHSC and the DZNE, with a particular focus on
Alzheimer’s disease. The agreement took effect May 24, 2013.

How Time Flies: The Molecular Architecture of Memory
Poster

Nobel Laureate in Physiology or Medicine 1987
Director, The Picower Institute for Learning and Memory,
The RIKEN-MIT Center for Neuroscience, The Howard Hughes Medical Institute,
Massachusetts Institute of Technology

“Roles of the Individual Hippocampal Circuits in Episodic and Spatial Memory”

The Kline Festschrift Symposium on “Nerve”

A Celebration of Regeneration and Renewal Portrait Unveiling

THE 17th ANNUAL RETREAT OF THE NEUROSCIENCE CENTER OF EXCELLENCE

Members of the Greater New Orleans Society for Neuroscience Chapter are invited to submit abstracts and participate.

"Brain Waves and Immune Genes in the Brain Wiring"

Link to pptx with pics

"How Proteins Speak with One Another in Cell Signaling"

Workshops with the National Institutes of Aging

"Can the Study of Neurons Address Normal and Abnormal Brain Functions?"

Director of the National Institute for Neurological Disorders and Stroke, NIH

"Learning Disabilities and Dyslexia" in April

"Brain Attacks and Brain Injury" in May

The Fourth International Workshop on Maturation Phenomenon in Cerebral Ischemia-
Apoptosis and/or Necrosis, Neuronal Recovery vs. Death, and Protection for Infarction

Inside of Brochure, poster scan

Symposium: Nitric Oxide and Other Diffusible Signals in Brain Development, Plasticity, and Disease

Satellite Symposium for the Society for Neuroscience

Center for Neurobiology and Behavior
College of Physicians and Surgeons of Columbia University
New York, NY

"Cell and Gene Transfer to the Central Nervous System"