The research in my laboratory focuses on the neurotransmitter serotonin, and the molecular mechanisms underlying its behavioral and physiological effects, with an emphasis on the serotonin 5-HT2A receptor.

Some of the most powerful tools to investigate the functional role of serotonin receptors, especially the 5-HT2A receptor, are what are commonly known as psychedelic drugs. Selective activation of the receptor with chemicals like lysergic acid diethylamide (LSD) are known to produce profound behavioral changes. These include hallucinations and detachment from reality, and are similar to those associated with certain psychiatric disorders like schizophrenia. My laboratory discovered that drugs of this class are extremely potent anti-inflammtories, and can block inflammation produced by TNF-alpha as well as prevent inflammation in models of human inflammatory diseases. Our focus on the investigation of the mechanism of action of this class of drug on both behaviors and physiological processes will provide critical insight into normal biological processes like cognition and abnormal processes including schizophrenia as well as for inflammatory-related diseases.

There are three main areas of research ongoing in my laboratory:

1. Elucidation of the mechanism of action of LSD in the mammalian brain to alter behaviors.

2. Determination of the role of 5-HT2A receptors to prevent inflammation.

3. Study of the neuropharmacology of serotonin in the fruit fly, Drosophila melanogaster. 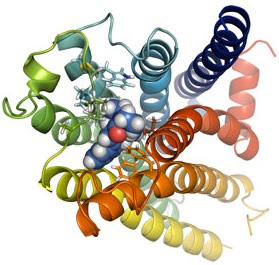