New Orleans, LA – Khanh Do, PhD, a postdoctoral fellow at LSU Health New Orleans Neuroscience Center of Excellence,
is a member of the first group chosen by the National Institutes of Health (NIH) as NIH Outstanding Scholars in Neuroscience.

Dr. Nicolas Bazan with Dr. Edward Dennis and Nobel Laureate Dr. Bengt Samuelsson
Dr. Nicolas Bazan organized and chaired an international conference on the significance of lipid signaling in biology and medicine in La Jolla, California, May  18-19, 2016, to honor Dr. Edward Dennis.  Dr. Bazan brought together, in a memorable meeting, all the leadership in lipid mediators, from basic research to translational studies.  In this photo, Dr. Bazan is being awarded a sculpture of Neuroprotectin D1 from Dr. Dennis and Dr. Bengt Samuelsson from the Karolinska Institute, Sweden, Honorary Co-Chair of the conference. The sculpture was made by Byron Rubin, a famous molecular sculpture maker, who has several of his pieces in the Smithsonian Institution, Washington DC, and in many other prominent places.

Business Honors
Dr. Nicolas G. Bazan, professor and director of the Neuroscience Center of Excellence at LSU Health New Orleans School of Medicine,
has been presented the 2016 Gradle Medal for Teaching by the Pan-American Association of Ophthalmology.
Baton Rouge Advocate, February 21, 2016 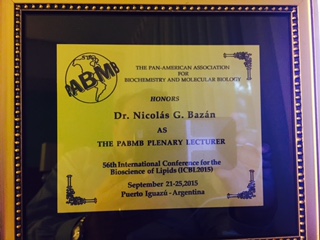 
Congradulations to Dr. Hamilton Farris as the recipient of the
LSU School of Medicine Aesculapian Society, Excellence in Teaching 2015 Award

Nicolas G. Bazan, M.D., Ph.D.
Association for Research in Vision and Ophthalmology Board of Trustees,
ARVO Gold Fellow, FARVO (Fellow of ARVO)
May, 2011

LSUHSC’S BAZAN AWARDED ARRA GRANT TO PRESERVE VISION
Haydee Bazan, PhD, Professor of Ophthalmology at LSU Health Sciences Center New Orleans School of Medicine, has been awarded a $710,000 grant over two years by the National Institutes of Health to advance her research on potential therapeutic approaches to heal corneal injuries. The grant was awarded under the American Recovery and Reinvestment Act. READ MORE

2007
Proctor Medal
The Association for Research in Vision and Ophthalmology (ARVO) presented to Nicolas G. Bazan, the Proctor Medal 2007, ARVO’s highest honor.  The award was presented during ARVO’s Annual Meeting in Fort Lauderdale, FL, in May 2007.  Bazan was chosen as the recipient of the Proctor Medal for his elucidation of the lipid pathways in the retina, his discovery of the DHA derivatives named docosanoids, his work on the platelet- activating factor in inflammatory responses, and his design of agents to prevent apoptosis arising out of his work.


Success Story of Louisiana CoBRE/INBRE, 2007-2012
Mentoring in Neuroscience in Louisiana: First Competitive Grant of this Type in Louisiana

1999
Neural Stimulation or Onset of Cerebral Ischemia Activates Phospholipase A2